Protecting our Waterways... One Trap at a Time 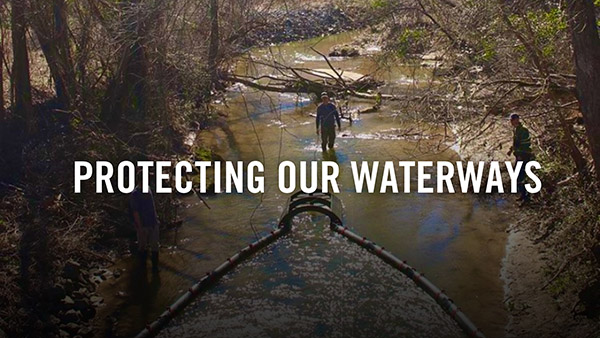 The beverage containers from parties and gamedays, and the everyday food wrappers, cigarette butts, and other items that fall to the ground as litter are an eyesore, but the implications could be more than just aesthetic.

When it rains, whatever is on the ground tends to wash into a nearby waterway. Because our waterways are connected, plastic particles from a bottle that gets thoughtlessly tossed on the ground in Athens, GA, can wash into a creek, float to a river, and eventually end up in the Atlantic Ocean, affecting all of the natural ecosystems along the way.

Every year, more than 8 million tons of plastic ends up in our oceans, and much of it gets there through inland waterways.

The most direct solution would be to stop littering, use reusable alternatives instead of single-use plastic, and recycle whenever possible. But anyone who has tried changing others’ behavior knows that is easier said than done.

Storm Water Systems, founded by UGA alumnae in Cleveland, GA, is working toward minimizing the impact of pollution in our waters, starting at a local level. Hindering the flow of litter at the source prevents it from reaching larger bodies of water.

“I don’t think there’s anything greater that we can do than to take on the role to help the planet that we live on or help the people that live here,” said Gary Hopkins, president of Storm Water Systems.

The Storm Water Systems device installed in Trail Creek near Dudley Park in Athens, GA is a fairly simple concept — the trash trap sits atop the creek collecting debris that floats at the surface, and the two arms protruding from the side funnel trash into the trap. The specific device is called the Banadlong Bandit Litter Trap, and it's designed to be affordable and portable, fitting in the back of a pickup truck when disassembled.

The trap captures floating debris, specifically plastics, while still allowing the creek to flow unimpeded. Because the trap is on the surface of the water, it does not interfere with aquatic wildlife movement.

For Gary, the connection to preserving clean waterways is personal and an integral aspect of his upbringing.

“When I was a little kid, there was no internet, there were no video games — we played in the creeks,” Gary said. “When I see what we’re doing to our rivers and creeks now with trash and other pollutions, it inspired us to get on board and do something to make a difference.”

The project is a partnership between Storm Water Systems, Athens-Clarke County, and the University of Georgia. The trap is installed just downstream from E. Broad Street, across from UGA’s Chicopee Complex and adjacent to Dudley Park. Anyone can stop by to check it out.

Our inland waterways are interconnected. Water in Trail Creek flows through three main rivers on its way to the Atlantic Ocean. Trail Creek, along with other campus streams such as Tanyard Creek which runs next to Bolton Dining Hall and under Sanford Stadium, flows into the North Oconee River. At the southernmost point of the UGA Athens campus, the North and Middle Oconee Rivers converge  to form the Oconee River. The Oconee River, passing through Lake Oconee, continues its southeastern trajectory until it combines with the Ocmulgee River to form the Altamaha River which enters the Atlantic Ocean near St. Simons Island.

The Trail Creek litter trap will do more than just catch litter. UGA’s New Materials Institute — which focuses on using green engineering to reduce plastic waste — will be using the litter trap to study what kind of waste is most likely to end up in Athens’ water systems. Students in the New Materials Institute will then use that data to brainstorm interventions targeted at reducing the types of waste that most frequently ends up in the litter trap.

“That data is important because then we find out what's ending up in our environment. And then we ask the question: What's happening so that this is ending up in the environment, and how do we prevent it from ending up here?” Dr. Jenna Jambeck, associate director of the New Materials Institute said.

Jambeck said the United States produces more plastic waste per person than any other country in the world. She explained that much of the issue with plastic is that it’s not biodegradable. Rather than decomposing, they continue to live on in our landfills.

Jambeck also explained how plastic that ends up in our waterways will often fragment into smaller bits, and create pieces of microplastic. Animals like turtles, fish, seabirds, whales, and other marine mammals will then mistake these pieces of microplastic for food. When these animals ingest the plastic, it can damage their insides or lead to suffocation. It can also lead to starvation as eating plastic makes them think they are full, even though they are not consuming any nutritional value.

“Reducing your plastic use is really not just about keeping your own backyard clean. It’s about protecting the entire watershed and ultimately the ocean,” Dr. Jambeck said.

People don’t have to be involved with the New Materials Institute to help find solutions for reducing plastic waste. Debris Tracker — an app created by Dr. Jambeck and College of Engineering professor Kyle Johnsen now powered by Morgan Stanley and in partnership with National Geographic — allows people to contribute data on where they are finding litter in their community, along with what kind of litter they are finding.

Inputting this data doesn’t have to be a huge effort. It can be as simple as noticing a piece of litter when you are on your daily walk and then inputting its information into the app. All of the data collected through the app is placed in a public database. The data can help inform policymakers, scientists, community activists, educators and people all around the world who are working towards well-researched waste-reduction solutions.

“It does help researchers see the bigger picture,” Dr. Jambeck said. “But users of the app can also use the data to go out into their communities and approach leaders with data and start that conversation about what can be done to move towards solutions.”

Interested in learning more? View this 2-minute video about the Trash Trap installation at Trail Creek and the ongoing research.